Beau and I took a quick trip out to the Pacific Northwest recently to do some volcano skiing. I had never been on the NW Giants, nor a volcano- ever, and was excited to explore a -new to me- style of terrain.

We only had the opportunity to visit two of the monoliths, but each was stunningly beautiful and awe-inspiring to say the least. Their sheer size is enough to make your jaw drop and your eyes wide. 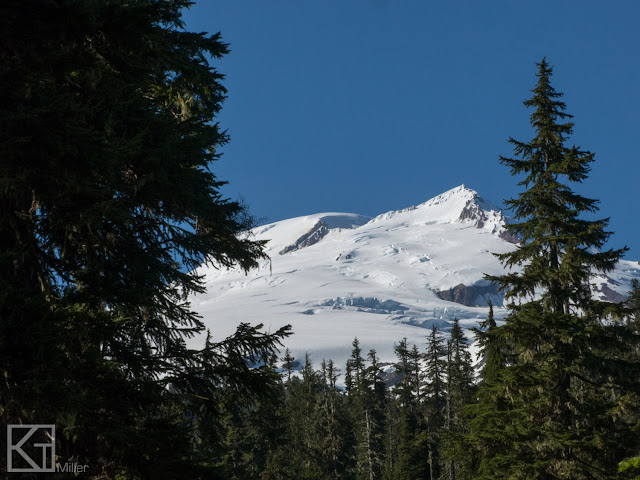 We had a wonderful day skiing the Easton Glacier on Mount Baker with a posse of friends- including high school ski partners Scott Larson and Nick Webb, and a new friend Mark Erickson. 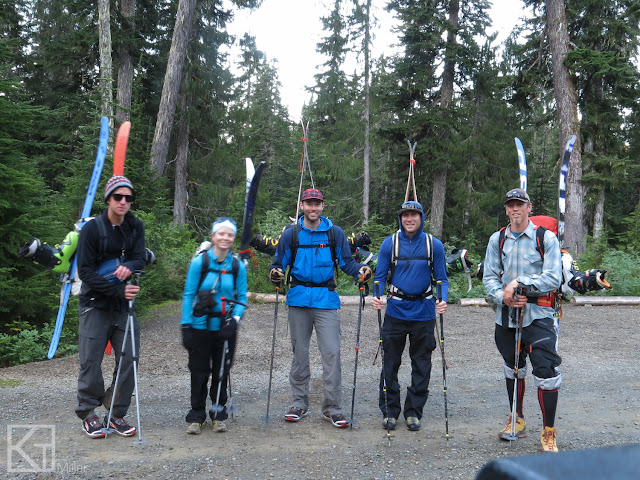 The Easton Glacier route is a massive sheet of glacial ice dropping from the summit to the rainforest below. The contrast of lush forest and stark glacier left an impression on me. As we approached the crater, a familiar sulfur smell filled the air- it reminded me of the geysers of Yellowstone. It seemed so surreal, almost fake its wildness. I couldn't believe I was standing on the rim of the crater of a volcano. It almost seemed like a place I wasn't supposed to be. The chances are slim, but I mean… really? 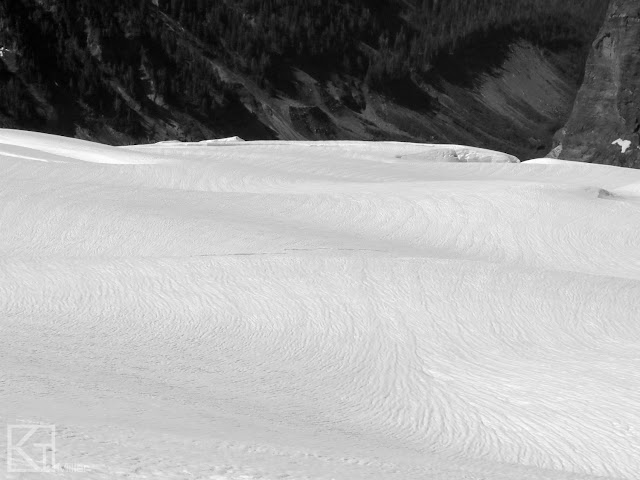 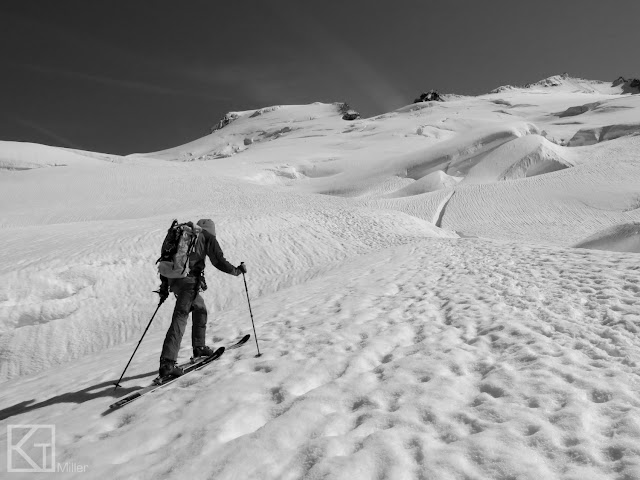 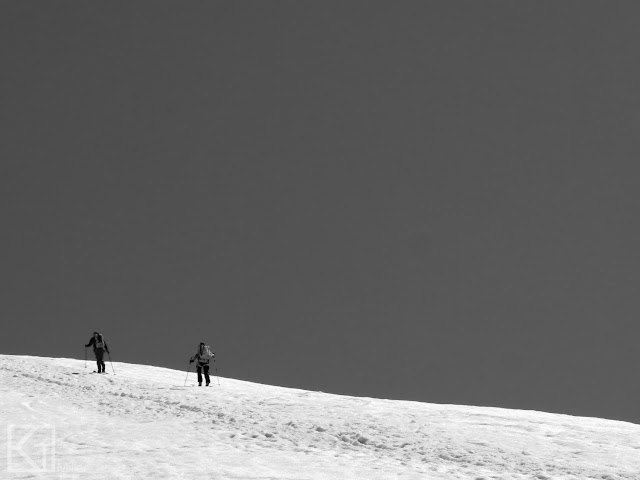 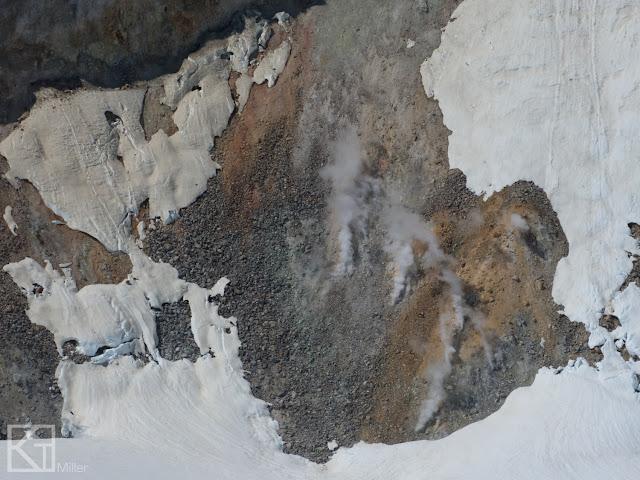 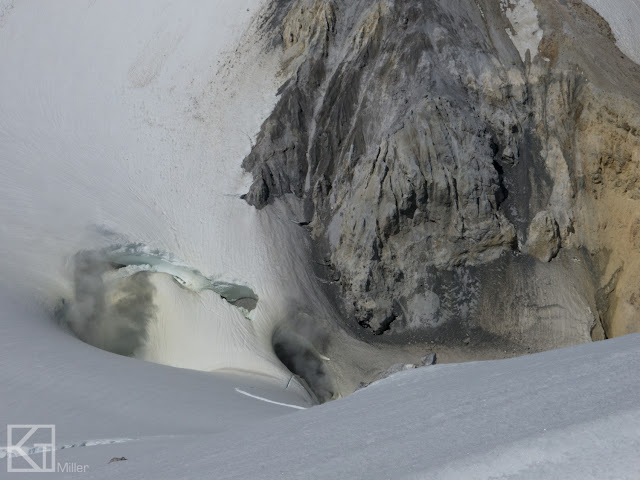 It was a big beautiful day, but we felt pretty good. For the amount of distance and vert we covered, I felt like there weren't too many shenanigans involved (sometimes our MT adventures require a lot more mental and emotional commitment). 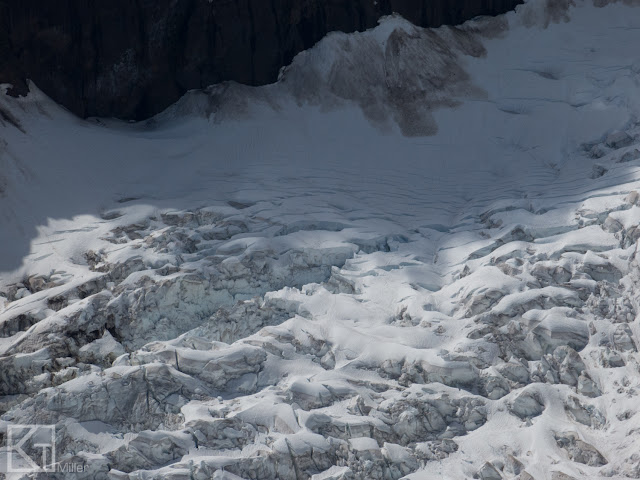 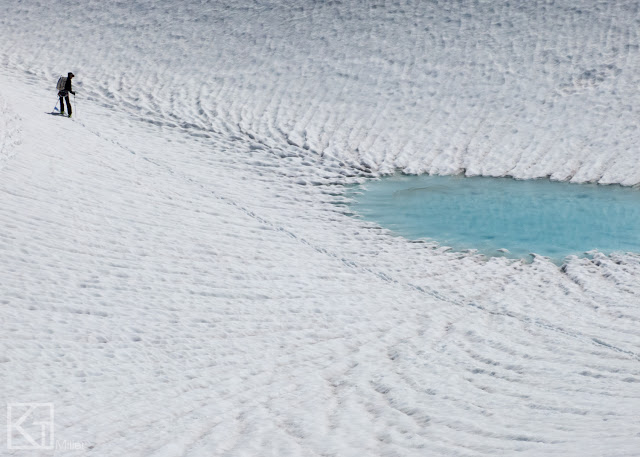 We took a rest day and staged ourselves for a go at Rainier- the giant of all giants, in all its enormous wonder. We started up the trail at 3am. It was hot. I stripped down to my T shirt immediately. As we approached in the dark the paved tourist trails turned to dirt. They emitted heat- a lot of heat. When we crossed the first snow patch it seemed like the temperature dropped 10 degrees. There was a very notable difference in temperature when on snow vs. dirt as we traveled from patch to patch in our sneakers. It must have been at least 50 if not 60 degrees.

We hit snow and skied down the first slope to the bottom of the Nisquali glacier. The snow was soft, it hadn't frozen overnight at all, not even close… and was doing that hot weather, mashed potatoes, lurchy, grabbing thing. You know- the kind of thing when you're skiing down and it's like someone is grabbing the bottom of your skis every few feet. We transitioned to skins and ski crampons and started our way up the glacier. We crossed some crevasses and holes. 10,000 feet of mostly serac hung above us- it was intimidating. I stopped the group and expressed my concern about the warm temperatures. It hadn't frozen overnight, we were crossing holes, and serac (guaranteed only to warm up more) was hanging above us. Everyone else thought we could make it through ok and that on skis it wasn't too much of a concern. We continued on. 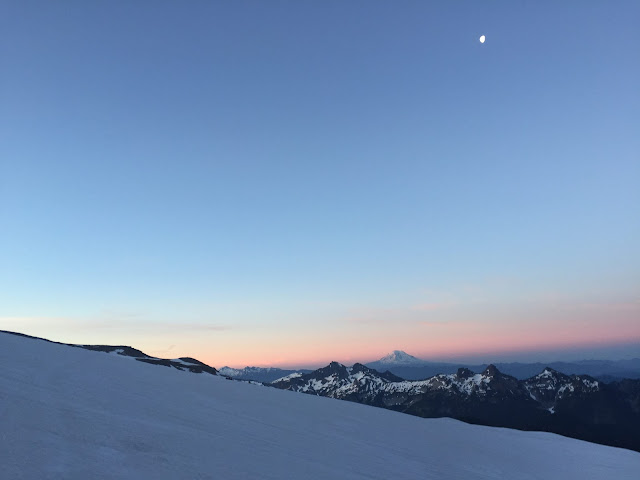 After traversing about 5 miles around the base of the mountain to the Southwest side we began making our way up. We were moving pretty fast, a good pace given the temperature and scale of the mountain, but it was warming quickly. We crossed a soft bergschrund and entered the bottom of the Success Couloir proper. It was as if we had just entered a toaster oven. We had been surprised earlier to see a party above us, and now we were thankful for the boot pack they had left behind. We began climbing the route as fast as we could. I am not much of a sweater- I just don't perspire that much, but I was sweating, profusely. Sweat was dripping off the side of my face and hair, it felt like it was 70 degrees. 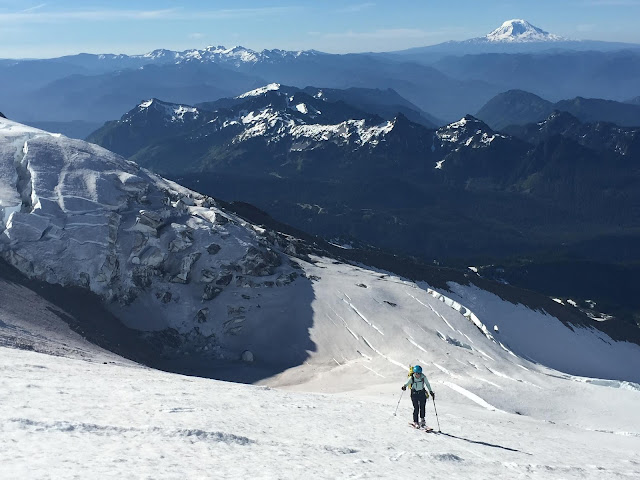 Fortunately the snow conditions seemed quite stable. Firm but softened by the sun. However as we reached 12,000 ft we encountered something I'd only seen before in Bolivia- penitentes- aka snow cups gone sour- stalagmites of snow reaching for the sky with craters in between and hard- nearly frozen- snow metamorphosing into ice… 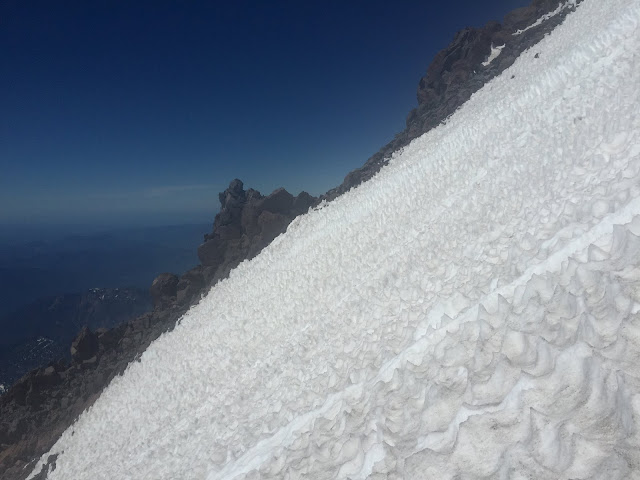 We were at 12,200 feet with 2,200 more feet to go to reach the summit, of which there was a high likelihood would be covered in penitentes… We called it there and started re-tracing our steps down the mountain. The first 500 vertical feet of penitents proved to be quite difficult skiing. Nick went first, 'grooming' the tops off as much as he could with each successional person following in his tracks, until it was relatively reasonable for the last.

We crossed some soft holes and an even softer 'shrund. I was thankful to not be crossing them any later in the day, when it would have possibly been warmer. We made it back to the car around 4pm and began weaving our way through traffic back to downtown Seattle. 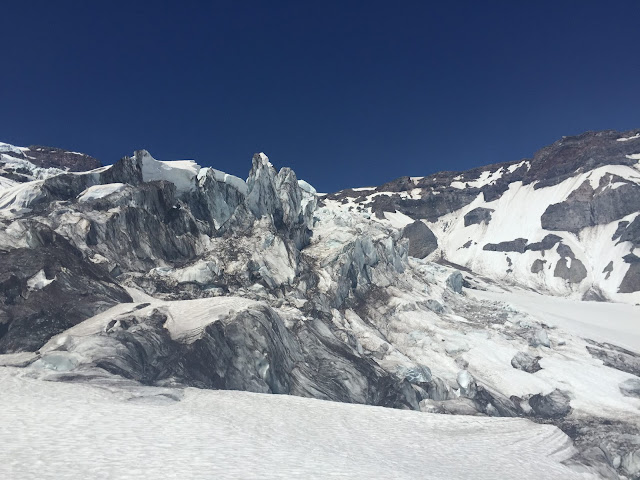 It was magnificent to be up on Mount Rainier. It would have been nice to summit, but sometimes I like getting shut down. I like having to return and come back again. It feels good to pay dues in a way. I feel like if I was always succeeding, I would be taking too many chances, too many risks, not turning around enough…

The biggest realization I had was how little snow there truly was on the volcanoes this year. It can definitely be attributed to a 'weird' season, but I fear that it is something bigger than that… Given the amount of snow we saw on Mount Rainier I am afraid to say that I think this summer is going to be really hard on that mountain and the glaciers that it holds. I wouldn't be surprised to see routes completely change due to glacial melt, or even to see routes dissappear. Mount Rainier as it is known right now, might be a very different mountain in the fall of 2015. Time will tell…

I appreciate everyone's optimism that next year will be better, and it probably will. But I can't help but wonder if this ski season is waking people up a bit, causing people to think about their actions and their impact on the planet… Winter is changing, and skiing is changing and I fear the the future of our sport is in great danger at the moment… I hope our species is smart enough to stop climate change, before the winter landscapes that we love disappear completely. 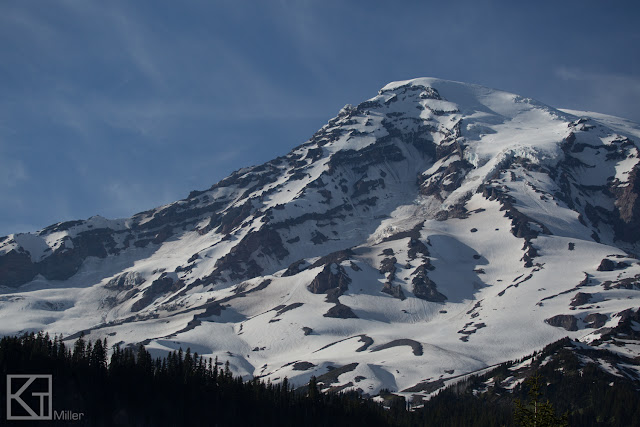 Posted by nerdybirdy at 11:22 AM No comments: